A RETURN TO MY CHILDHOOD HEART

A few years ago, when I began my literary fiction series, I chose New York City as the setting for my story. I was born and raised in Woodside, Queens, New York, so it seemed the obvious choice. I soon realized this was not the story I wanted to tell. The determination to write since early childhood had nothing to do with wanting or needing to tell my story. Fantasy drew me in, and I loved a challenge. Somewhere along the line, I became stuck in reality, and this created limits in the limitless realm of fiction.

I decided to find a different setting for my story, a place I’d never visited. I chose Glastonbury, on the banks of the Connecticut River. I would visit there eventually and numerous times but only after I created it first in my mind. Of course, these days, we have the Internet for research—images, maps and that little yellow Google person. One could travel the roads and study the map while sitting in a comfortable office chair drinking coffee, which I did.

This past Sunday was my first “actual” visit. I traveled there with my sister, Denise, my son, Jesse, and my nephew, Christopher. We decided we would go to Hartford first, which is about twenty minutes from Glastonbury.

We set out at 9 a.m. on the most beautiful September day. After an hour of driving, we stopped for breakfast at Cracker Barrel Old Country Store in Milford. Christopher tried the apple streusel French toast breakfast. Jesse had a bacon cheeseburger. Denise and I ordered scrambled eggs with biscuits.

Now, Jesse never wants photos of him on the Internet, which I thoroughly respect. He took these photos at Cracker Barrel, except for the goofy one where I tried on the cowboy hat. Denise took that one while Jesse watched Christopher take videos of a toy pig singing ‘Wild Thing’ and a toy dog singing ‘Dance to the Music’.

Our arrival in Hartford was at least an hour later. 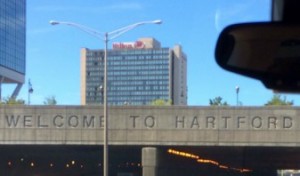 We bought tickets for a tour of Mark Twain’s house and poked around the museum until it was time for the tour.

I was thrilled at the first glimpse of Mark Twain’s Victorian Gothic revival home. I could see why this place was so special to him. (As an aside, the guide usually referred to Mark Twain as Samuel Clemens, Mr. Clemens or Sam. As I am sure most people are aware, it was his real name.)

When we went inside the house, the guide asked that we refrain from taking photographs or touching anything except the banister while walking up and down the stairs. I must say, the décor is impressive. I loved the ambiance, particularly in the cozy library, which faced a conservatory that had a fountain and lush plants. The interior of the house remains dark for the tours because the Clemens family had gas lighting when they occupied the home. I love dim lighting, but I imagine this much darkness can become dreary, not to mention a little spooky at night, going up and down those stairs, probably with a candle. It prompted me to ask about ghost stories. The guide informed us that people claimed to have seen the ghost of Susy Clemens, the oldest daughter. She died alone in the house, from spinal meningitis, at the age of 24. Employees also made claims that the butler’s ghost continues to work there. We learned that the show ‘Ghost Hunters’ featured the house. Apparently, there are ‘Graveyard Shift Ghost Tours’ that sell out quickly, so tickets must be bought in advance.

Some people in attendance were not thrilled to hear about the ghosts. I hadn’t thought about that since I don’t seriously believe in ghosts. Denise reminded us of the time we all walked through the haunted maze at Bayville Scream Park. While searching frantically for the exit, I said (loudly) there was no way out, then suddenly all these kids were crying hysterically. Their parents had to assure them there was an exit somewhere. It’s a good thing I believed in ghosts when my own son was a child. I was less oblivious to people’s fears and concerns about ghosts and other creatures that likely don’t exist.

The tour, while quite interesting, took much longer than they said it would. Through most of it, I didn’t focus on our confinement to a relatively small space where only three people weren’t strangers. Toward the end, this reality became painfully obvious. I wanted to ball gag anyone who asked another question.

Outside on the grounds, we took more photos. I came up with the unoriginal idea to pose with a book, since I like those seemingly candid shots of authors reading books. I am still laughing about this. Denise (and even Jesse) took a dozen photos like that—me reading on the grass, on the steps of the museum, on a bench, etc. Everyone made me laugh with funny comments about these “photo-ops” especially since I hate photos of me, let alone sharing them on social networking sites. During the last attempt, Jesse thought he had the perfect shot when Denise came over and said, “Still with the book?” I lost it and laughed hysterically in the only picture you will see of me with the book. It was the way she said it. She is funny. They are all so funny. Christopher later decided he, too, wanted a picture while reading a book. It became a thing…a silly thing. Silly is good.

Here are a few of the photos, which include some other houses on the property, like Harriet Beecher Stowe’s house. The Twain and Stowe houses are captioned at least one time.

I am including the link for anyone who would like to see the interior we could not photograph and some other interesting links.

Where Mr. Twain and Mrs. Stowe Built Their Dream Houses

By the time we arrived in Glastonbury, it was late afternoon. It was not easy to find certain places, and we often found ourselves on private property during the search. One or two of us got out of the car anyway, camera in hand. Jesse said we should have brought bail money. He wouldn’t budge from the car.

We drove around in circles trying to find the entrance to Shoddy Mill Coon Hollow’s pristine woodlands. That didn’t happen. The one person we asked sent us to the wrong place, though we thoroughly enjoyed the scenic drive through the woods of Kongscut Mountain Open Space and Mountain View Estates. It was gorgeous, but we didn’t take any photos. We were too busy looking for Shoddy Mill Coon Hollow.

Glastonbury is a pretty place. I wish we had more time to capture this in photos; however, it was great to be there. We did more laughing than anything, but that’s the best part of any trip. We had fun.

These are photos of my main character’s neighborhood (which is a bit too close to the cemetery). She attended Smith Middle School. Addison Park was part of her childhood.

Here is a link to the preserve we were looking for (Shoddy Mill Coon Hollow).

On the way back to New York, we saw the most incredible sunset. Denise loves to photograph sunrises and sunsets, but she was driving. I took a picture for her with her phone, except I never heard the click. I thought it didn’t work the first time, and somehow she ended up with I don’t know how many pictures of that sunset.

She was busy deleting sunsets at Red Lobster while we ordered our food, scolding me. We all joked. We were home in New York by then and starving. We savored every bite of our meals. Eating is part of the fun, too, isn’t it? Besides, we ran out of Twizzlers in Hartford.

Here is what I learned. Your heart, as a child, knows. Through life’s encounters and experiences, you can pile shovel after shovel of dirt upon it—bury it so deep that it is lost to you. It’s important to dig through all the dirt and find it, then embrace it, and never lose it again.

Comments on: "A RETURN TO MY CHILDHOOD HEART" (6)