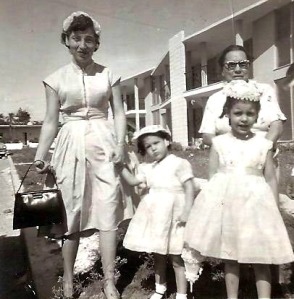 My mother, Carmen Sanchez (or Carmelita/Carmecita/Carmita as her family often called her) was born in Havana, Cuba, the youngest of ten children. She grew up poor and fatherless, since her father passed away when she was only two.

In the photo above, we are in Cuba, and I am holding her hand. My older sister, Maria, is standing next to me and my Abuela is standing behind.

I remember a lot about that visit to Cuba.

We must have gone to some large marketplace in Havana. I imagine my mother had described Fidel Castro to me, so each time a man with a beard passed; I pulled her skirt, asking, “Mommy is that Castro?”

“Shush,” she would say, stifling laughter. “Quiet. He’s not going to be walking around here, and people can hear you.”

“They can hear you,” my older sister repeated. “Stop it!”

I quickly lost interest; for it appeared, there were baby chickens for sale on every corner.

“Those are pollitos,” my mother said.

She laughed, taking my hand. “Come on.”

I kept lagging and lingering. She kept urging me on.

An aunt we were about to visit had a thatched roof farmhouse with a backyard full of pollitos, and my mother knew this. I would spend the afternoon admiring pollitos and feeding them corn.

I found this video of Havana and another of the gorgeous beach she took us to during our visit, which is a nice treat on this cold winter day. If you don’t have time, skip those, as I will get back to the subject of my mother.

My mother was tiny but fierce, a force to contend with, determined to learn English and to work hard. She did that from the beginning up until the day she retired, same as my father who came to this country from Italy. They were proud to be American citizens. He fought for his new country. She felt honored to be a soldier’s wife. He worked as a butcher then meat department manager for a Grand Union supermarket in Astoria, Queens, New York. She worked as a meat wrapper then an assembly-line bench worker at Bulova Watch Company in Woodside and ultimately a salesperson for A&S.

My mother never immersed us in the Cuban culture. She was afraid of people judging her, people who perceived Cubans as freeloaders. I wish she hadn’t felt that way, and it warmed my heart to see a glimpse of pride in her heritage when she taught us Christmas songs she had learned in Cuba and talked about their traditions. I never wanted her to feel ashamed of who she was.

My fond memories of her include her love for holidays, her decorating with a giddy enthusiasm, no matter how many years had passed. She and my father made every holiday and birthday special, celebrating us along with their life together. Our lives were far from perfect, but they gave so much, with their hearts always in the right place.

In the first photo below, I am the girl on the far left with my mother standing over me. In the second photo, I am watching my mother cut the cake on my birthday. 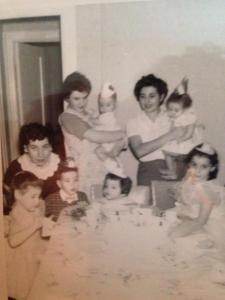 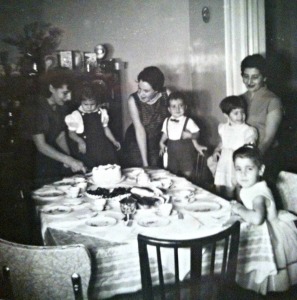 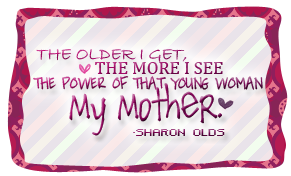 She taught me unconditional love because she gave it. For many, many years, it was the rarest thing to receive in an unapologetically harsh world. If I had doubts, she restored my faith in who I was, and in the dreams I cherished. She was proud of her daughters, her girls. When it came to my father, her love and devotion knew no bounds.

As an aside, she loved to shop, especially for clothes. I inherited that, along with her lack of impulse control. My sisters did, too.

In the three photos below, the first is me with my true hair color. HA! In the second, I am the blonde with my arm around my mother during one of our New Years Eve celebrations. My younger sister, Denise, is to the right of the little cousin I am holding. In the last photo, my mom is in front of her daughters. That is me on the left, my older sister in the middle and my younger sister on the right. 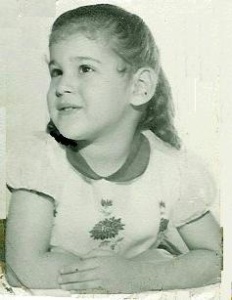 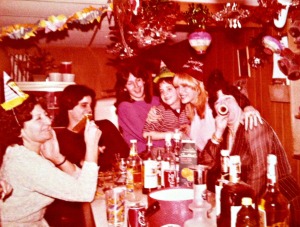 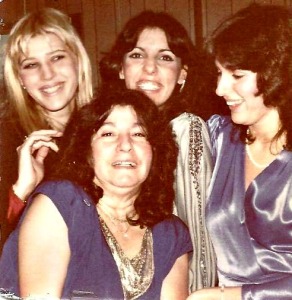 My lovely mother died of a stroke in June of 2011. That first night she was gone, I remember feeling she was frightened. In retrospect, I think I was the scared one. Despite her age, she looked beautiful in her eternal rest. I’m sure she was at peace.

Me…not so much. I had panic attacks in the months that followed. My world grew darker and colder, so much darker than those sunny days of laughter in her comforting presence. Something was gone from my soul, a part of me. I thought about all the times she called just to hear my voice, and to see if I was okay—those times I was too busy and figured I would call back later. I should have taken every call and savored every moment I could hear her, hold her, laugh with her. For the most part, I did but not enough. It is never enough. I just miss her so much. 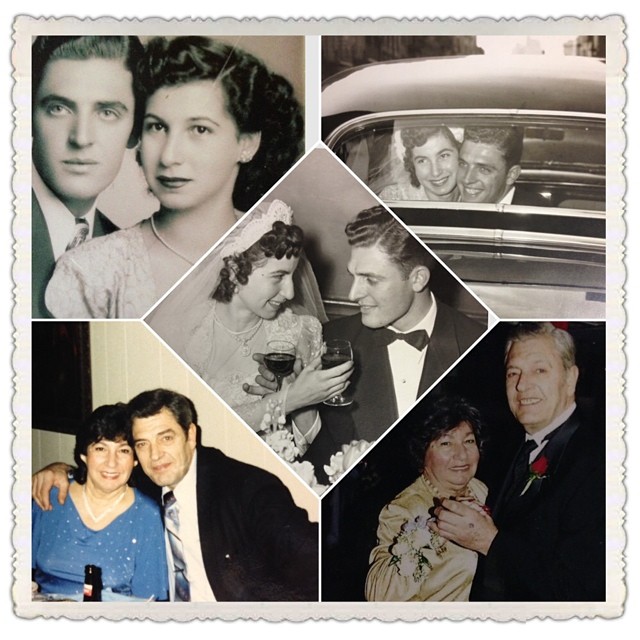 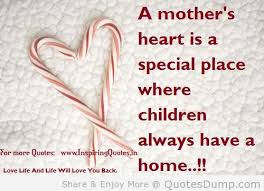 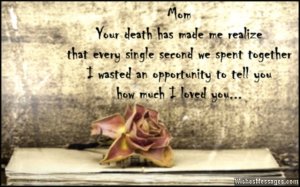 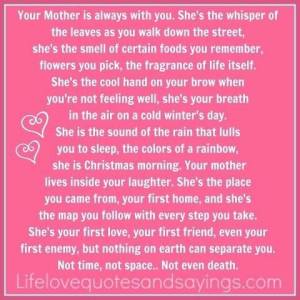 © Copyright January 8, 2015 by Kyrian Lyndon at kyrianlyndon.com. All rights reserved. No reproduction permitted without permission.